How to Resign From an Executive Job 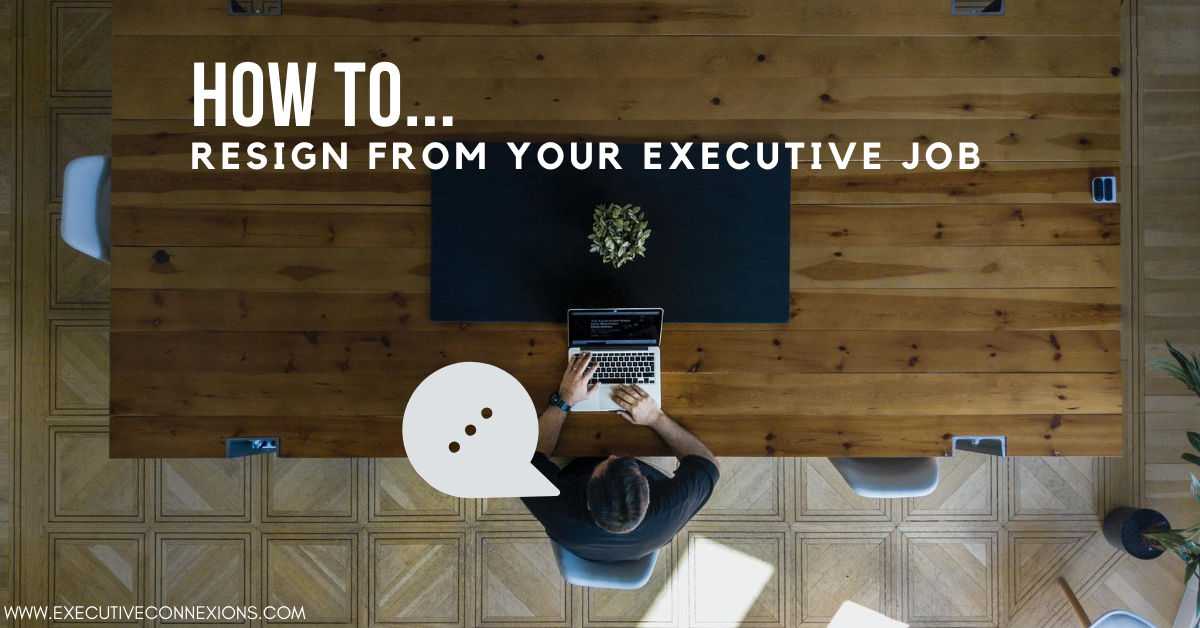 The top reasons people quit and move onto something new is a lack of advancement opportunity at their current company, a negative work environment, an unproductive relationship with their boss and, of course, money.

There is a good way and a bad way to quit a job for a change of career. The former sets you up for success while the latter often leads to distress. In senior management, how you leave a job is just as important as how you start it.

Of course, the best case scenario is to leave your current role when you choose and because it’s the right move for you. However, it’s also critical to stay calm and in control when a departure is not your choice. A poorly-managed exit, no matter the cause, can come back to haunt you later in your career; it’s a small world after all.

When you leave a job anything less than graciously, you run the risk of ruining your reputation. Your resignation is the last official act you’ll do, and it’s the way you’ll be talked about and remembered for a while. Keep your personal brand intact.

It’s important to plan how you will resign. DON’T check out pre-maturely. Finish as many projects and tie up as many loose ends as you can. Create a progress report to leave behind for your boss and co-workers that shows where you are with each task. You could also consider putting together some information to help your replacement transition smoothly into the position – even information such as where files are located, as well as phone numbers and e-mails for relevant contacts. Bring a list of outstanding projects and responsibilities when you meet with your boss to give your notice.

When writing a resignation letter, it’s important to keep it as simple, brief, and focused as possible. The letter should also be positive. Although under some circumstances, such as a cross-country move or a decision to focus on parenting, it may make sense to disclose the reason for your resignation, in many cases sharing the details about why you are resigning is not necessary.

If you’re great at what you do, chances are your company will try to get you to stay by making you a counter-offer, which may include greater opportunities for advancement, better perks and more money.  But if you’ve made a well thought-out decision to take another position then there’s no reason to change your mind, because that decision is about more than just money. Instead, turn down the counter-offer but leave the door open, saying that you feel it’s important to your development to try something new but would like to stay in contact because you never know what the future will bring. What you learn in your next position might make you an even better fit in the future for the company you’re leaving.

After you’ve planned and set your departure in motion, it’s time to relax and immerse yourself in the excitement of the new career change that is just about to unfold for you. Start to consider your first 90 days plan, and how you’ll make an impact in the new role.

What’s the first step to exploring how we might support your career plans?

Whether it’s around new role choice or to discuss challenges within your current role, a great place to start is our ‘Career Strategy Call’ . We’ll spend some time exploring in confidence the priority career challenges that you’re facing or questions you may have, in an open and honest discussion.

We look forward to speaking with you. How to Tap into the Invisible- The Hidden Job Market

What if your perfect job is not advertised in a traditional way? What if you had to stretch your job hunting skills to find… Being Social: What’s it all about? [Podcast]