‘Kick off your shoes’ for job interview success: How Emma’s adaptability won her the job 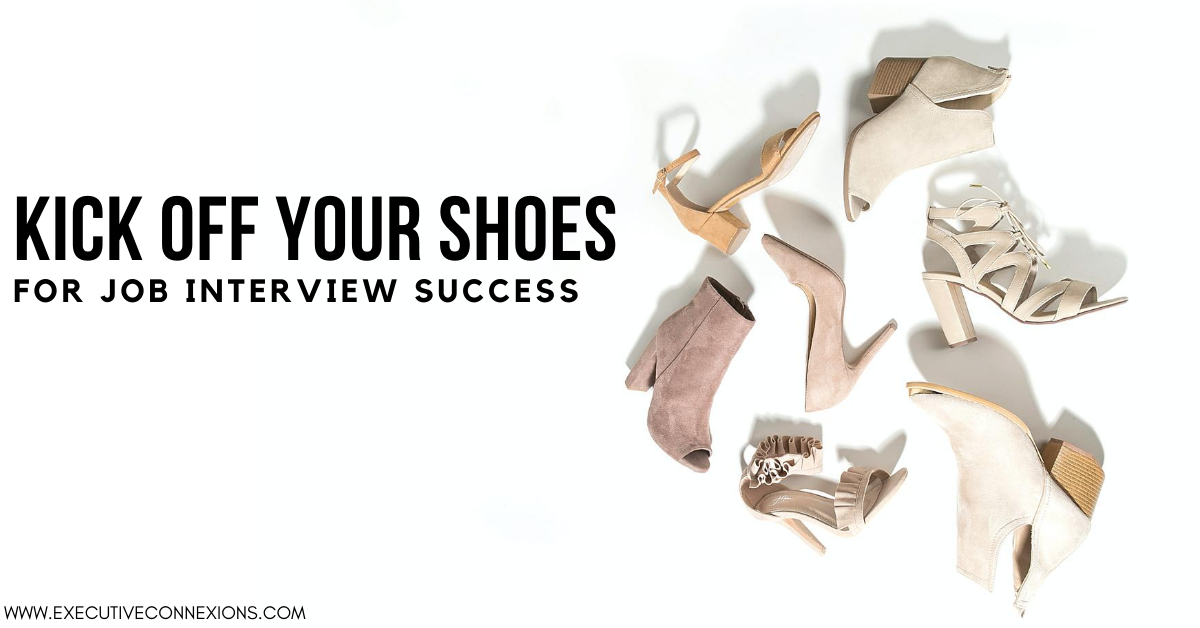 This is a story about a senior level candidate who, in a standout move, kicked off her heels during the selection process for the job of her dreams and actually landed the role. Here’s how her bold choice got her the job…

When I met Emma, she had been in her job for almost 10 years. She knew she wanted to make a change in her career and she didn’t know where to start. The prospect of seeking a new role; navigating the hidden jobs market; selling herself to potential employers caused her to feel anxious. This anxiety stemmed partly from not knowing which direction she wanted to take and partly from her own lack of confidence.

As we worked through her personalised coaching programme, Emma explored her values, strengths, motivators, achievements and interests. In doing so, she become clear about what she wanted in a role. This exploration – and increased self-awareness – alone was enough to see an increase in Emma’s self-confidence but we took this further with additional coaching for social confidence. Both Emma and I were acutely aware that the ‘confidence element’ would be an imperative feature in any future interview process. The academic and achievement side of ones CV is one thing, but the ability to be social is equally important – and often overlooked by senior candidates in the executive job search. It forms major components of an interview process, and Emma needed to be prepared for this. Soon enough, Emma not only appeared more confident, but she felt confident too.

After a few weeks, Emma found a job that she thought would be perfect for her: a Strategic Manager position in a children and parents service. She felt sure she could do the job, and duly completed the application form, matching not only the “Essentials” but also the “Desirables” listed on the Person Specification. (Desirables can sometimes get overlooked, but can often be the difference between being on the yes or no pile for interview selection!). Emma got the interview! She was both excited yet anxious about her possible performance in some of the stages of the selection process. For example, she was required to attend a stakeholder evening ‘get together’ with parents and their children, employees and observers. Fortunately, we had been spending time coaching through this type of challenge, and despite her concerns she had improved no end in her confidence.

The evening in question came and her and five other candidates entered a large hall containing bean bags, tables and about fifty people. It was a semi-structured affair of chatting to stakeholders around the room across a broad range of subjects. Emma decided to take off her jacket, kick off her shoes (an inspirational move!) and sit on the bean bags, chatting to the parents and interacting and joking with the children. You can imagine the “over the top of the glasses” style looks she received from other candidates in the room. She also spent time circulating with employees and observers.

Emma demonstrated great flexibility and the ability to adapt to circumstances; to create a ‘safe environment’ for those she’s communicating with and willingness to get on the same level, whether that’s formally observing a situation or sitting on the beanbags alongside the children and parents. Emma could do both. She also showed she has excellent communication skills. Emma is naturally empathetic and uses an appropriate balance of listening and talking. She had drawn on these skills during the stakeholder evening, being genuinely interested in what others were saying – her interviewers, employees, the parents and even the children – she had questions to ask everyone and shared experiences to talk about. She proved herself to be personable and able to get along with people of all ages, from all backgrounds.

This evening was a missed opportunity for the candidates that remained formal alongside the observers.

The interview followed the next day, consisting of a battery of questions and a tour of the building. (Emma knew never to refuse a tour of the building, even if you know it well. It can really help; you’ll often be introduced to employees, who may also in turn be involved in the decision making process). This was the final hurdle and Emma’s last chance to shine, but she saw it as an opportunity to pull together all she had learnt about the organisation and its stakeholders so far and offer some of her own insights.

The time spent barefooted on the beanbags conversing with parents and employees had given her an advantage over the other candidates: Emma knew what concerned the stakeholders; what their needs and wants were; she gained insight into the organisation that the other candidates couldn’t possibly have done from the sidelines. Balancing the views of all the stakeholders she’d spoken with, Emma was able to speak with the people on the interview panel as if she were a consultant, bringing new ideas and solutions to the table. And of course, she used the same active listening and questioning skills she had demonstrated at the evening stakeholder event, creating rapport with each of the interviewers.

It’s no surprise that the interview went well and I’m happy to report that Emma was offered the post.

What can you learn from Emma’s story?

In essence it’s important to consider:

I hope that this journey has given you a few insights into the social side of the interview process. Consider the social skills that you have; hone them, be aware of your surroundings and act accordingly.

Have you ever taken a bold move, like Emma did, that led to you landing you a new role? Tell me about it in the comments below. What Mr Killa taught me about job search resilience

In terms of executive career advice, I wasn’t sure if I wanted to write about what a singer could teach me about this or job search… Who or What is a Career Coach?

“Successful and fulfilling careers are the result of ambition, vision, planning and lots of determination. This may sound daunting, but when we take on…
PrevPrevious
NextNext