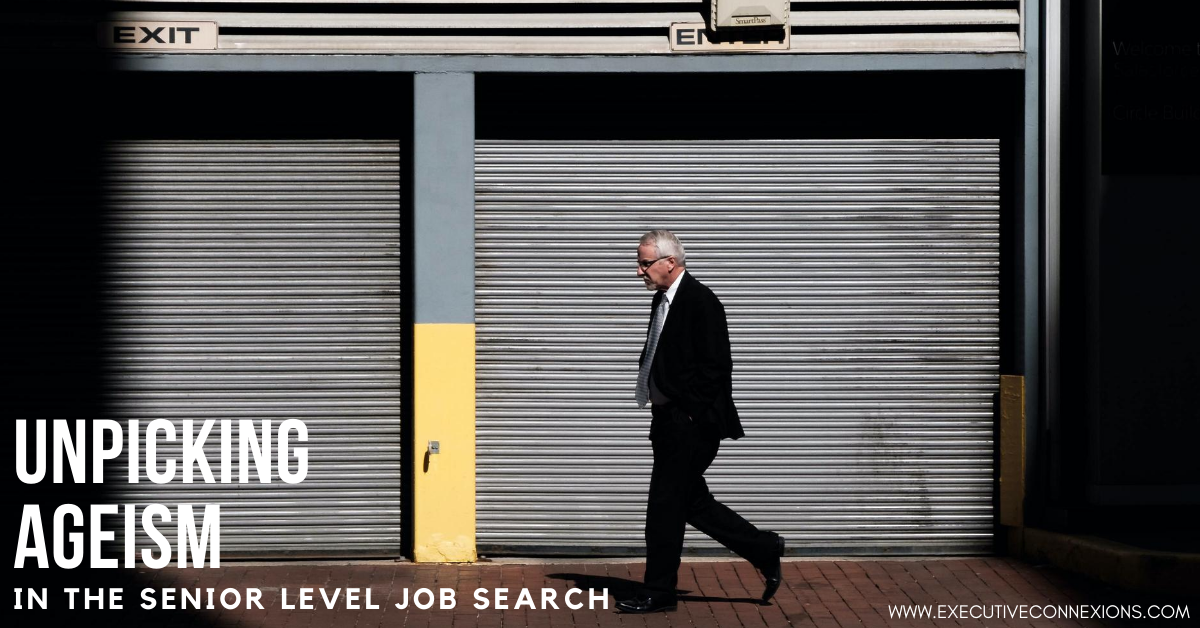 As “-isms” go, ageism – particularly when it manifests itself as a bias against older, senior-level candidates and employees – can find itself relegated to being of lesser importance, not as serious as some of the other “-isms”. After all, ageing is something we all acquire through the simple act of living. It can be perceived as the demotic “-ism,” something of an inevitability, something everyone can expect to encounter in one form or another when their time comes.

But promoting positive perceptions of our workplace selves as we advance in years and experience is becoming increasingly important, not just for ourselves, but also for the generations that follow.

The adoption of new technologies, stark socio-economic realities and increasing life expectancy have transformed the workplace. It’s not uncommon now for our working lives to encompass a variety of professional directions, redundancy, self-employment or a portfolio career, and concepts of retirement have been comprehensively redefined.

And yet a legacy of bias against older workers seem to persist:

“A recent ComRes survey for BBC Radio 5 Live found that those from 45 – 64 years of age were most likely to have reported workplace age discrimination when applying for positions. Over a fifth of 45 – 54 year-olds, and a third of 55 – 64 year-olds had first hand experience of this bias.”

Making assumptions as to people’s capability based on their age often reflects unconscious bias – the beliefs and values we all accrue from our family, culture and surroundings. These shape how we view and understand ourselves and others. Largely positive and essential for helping us navigate society, these accepted “norms” can be damaging when they’re playing catch-up with reality.

In this way, older candidates may be perceived as being less adaptable, creative and flexible than their younger counterparts. They may be judged as not being up to date with workplace technology, lacking in the physical or intellectual capacity to fulfil their roles and working with half an eye on slowing down or retirement.

Overcoming this most pernicious of workplace biases is something those searching for, and securing, senior-level appointments are uniquely well placed to do – a groundswell of experience, skillsets and attitude overturning perceptions.

Additionally, being aware of the origins, whys and wherefores of a bias can help clear the way for adopting and assimilating more beneficial progressive beliefs.

It seems that any discussion on ageism immediately reveals a number of dichotomies:

And it’s senior level candidates that often find themselves at the sharp end – navigating an impossible balancing act: demonstrating the necessary experience, record of achievement and maturity for a particular role while simultaneously trying to prove their levels of energy are not aligned to their biological age.

So where does this bias come from?

If we take the view that globalisation is the result of powerful multinational corporations spreading across a better-connected world, something that’s been gathering pace since the Second World War, then this phenomenon has gone hand in hand with increasing demands being placed on those running businesses.

Management texts such as Jack Welch’s 2005 best-seller “Winning,” based on his 30 or so years’ experience running GE, highlighted the qualities essential to business success in this increasingly integrated global environment. Jack Welch, legendary chairman of GE (once known as General Electric), from 1981 – 2001 was renowned for consistently delivering on earnings targets – he presided over a period when the value of GE rose by 4000%.

As one of the most respected business leaders of the 20th Century Welch stressed the importance of hiring the right people and devised a 4-E and 1-P formula to assist in this process during his time at GE. Two of the 4 Es and the P for Passion revolved around “energy” (the other two concerned “edge” – not being afraid to take tough decisions and the ability to “execute,” or get the job done).

It was Welch’s view that managers needed to have positive energy themselves and to inspire energy or energise their teams. Practically speaking, this “juice for life” (passion) meant having the capacity to work over 12 hours a day, every day, every week, in order to cope with the demands of international and multinational business.

With such thinking around energy and performance becoming widely accepted and borne out by the experiences of the economically high-growth 1990s, management teams became correspondingly younger. For example, at the apotheosis of Tesco’s dominance of the UK retail market under Sir Terry Leahy, almost the entire board of the company came in at an average 45 years of age.

It could be argued that the global financial crisis of 2007-8 marked a watershed moment. Its fallout has meant that governments have been compelled to pass legislation pushing back statutory retirement age and it also reignited discussion around the desirability of having more balanced boards – boards that included ‘senior’ people, not only to restrain their younger counterparts, but also in recognition of the value experience brings.

Today misconceptions around aligning energy levels with age may still seem to dog more senior candidates. But changing perceptions is getting easier because of the sheer numbers of people extending their working lives, for whatever reason. Also, it can’t be denied that being 45, 50 and 60 plus years of age today, means something quite different to what it did just 20 years ago.

As we move from a product-driven economy to more of a service and experience driven model, the traditional value chains of business-to-business (B2B) and business-to-consumer (B2C) are being exchanged for a service dominant logic, via the increasingly widely adopted term, human-to-human (H2H).

Such a shift favours the soft skills that experience and maturity bestow – enhanced life skills, a more stable sense of self and the capacity for, and interest in, mentoring and supporting younger and less experienced team members.

The value of networking

Networking creates social capital – social capital being… “the actual or potential resources…of a durable network of…relationships of mutual acquaintance and recognition” (Bourdieu 1983). Vital in helping us network effectively – social capital is the influence and reach we have within our network, the goodwill we generate from the things we do for others, and what they, reciprocally, do for us.

Building a strong network of contacts, connections and relationships pays off. If people know us or know people who know us – age and any other factors that may produce a bias are set aside.

We can be seen clearly for the individual we really are and play to our real strengths, irrespective of factors that we cannot and indeed, wouldn’t, wish to change.

If this article resonated with you, perhaps you would like to discuss your job search with an experienced executive career coach? To arrange a discussion, contact us at contact@executiveconnexions.com or call us on +44 (0) 203 384 4188 Land your next role faster: Ground-breaking strategy for senior executives

Executive search is changing. Employers are now seeking executives who can lead their companies into the digital future, vs. the industrial age leaders of old. Today,… LinkedIn is NOT your CV [Podcast]

Your LinkedIn profile offers the chance to show the recruiters, headhunters and employers that will search for you, what makes you different in a way…
PrevPrevious
NextNext